If you are a gamer or technology fanatic, you certainly heard of TAA and FXAA graphic enhancements. Both have a significant impact on modern video game graphics, so today, we are going to touch on the subject of TAA vs. FXAA and talk about which one is better.

TAA refers to Temporal Anti-Aliasing and is an algorithm that applies anti-aliasing methods in a way that reduces visual noise. On the other hand, we have FXAA, which stands for Fast Approximate Anti-Aliasing, and it uses bloom filters to approximate anti-aliased textures, and it generally offers faster performance than its TAA counterpart. However, there is much more to this subject than just a raw definition, and we are going to go in-depth about it in this article. There is a lot to cover, so let us start without further delay.

Information About TAA and FXAA

TAA is an anti-aliasing method that uses information from the framebuffer’s prior frames to analyze the aliasing and apply anti-aliasing techniques in order to remove the “ruggedness” of the image.

Although it offers various advantages over the FXAA method, it takes quite a lot of your GPU’s memory to store the data from prior frames, which, overall, makes it a much more resource-heavy process.

This technology uses multiple samples it receives per pixel from different frames and uses these bits of information to create an anti-aliased version of the pixel. Even though TAA exerts more processing power than FXAA, it takes up significantly fewer resources than some other anti-aliasing methods that are available.

When TAA is enabled, you will be much less susceptible to artifacts than with FXAA since it uses data from multiple frames. For those that do not know, artifacts are caused by a corruption in the spatial encoding of objects outside the FOV which cannot be distinguished from objects inside the FOV.

The only downsides are that if you are using a cheaper, low-end graphics card, you should expect performance hits with TAA, and it will produce slight blurriness, so we recommend turning it down either in the game or your GPU’s software settings to get the best results.

Unlike some conventional anti-aliasing methods, FXAA applies aliasing to the on-screen pixels after your GPU renders the scene rather than smoothing out the edges of each line or polygon from the scene. All of this provides two important advantages.

The first one is that pixel-by-pixel anti-aliasing considers jaggies inside of the render polygons that typically get overlooked by other methods that smoothen them before the rendering process.

The second is that being a simple pass filter, it has a low memory consumption, which significantly frees up that precious space that can provide you with better performance. This is particularly significant for lower-end graphic cards with lower amounts of video RAM.

However, FXAA is not without flaws. Applying a filter throughout the screen can be done for excessive blurring in areas like the text and HUD if the game does not support it. You will probably also notice a reduction in sharpness which is a result of the filter causing a higher blur concentration in order to reduce the jaggies.

It is also important to note that FXAA’s method, in which it applies the anti-aliasing filter, is independent of the prior scenes, which creates issues such as crawling and artifacts slipping past to create the final image.

In comparison, TAA manages to correct this by comparing the current frame to the prior before it finally applies the anti-aliasing effect. FXAA also often overlooks a good number of jaggies that form parts of very complex shades, which is an expected result, seeing that it does not analyze the actual model.

Generally speaking, FXAA is a fast and intelligent method for getting anti-aliasing without overburdening your graphics card. Most modern games pack it as a default setting, considering the negligible amount of resources required to run it. Same as TAA, FXAA can be controlled through the game and through your graphics card’s software in the settings section.

Benefits and Drawbacks That FXAA and TAA Bring to the Table 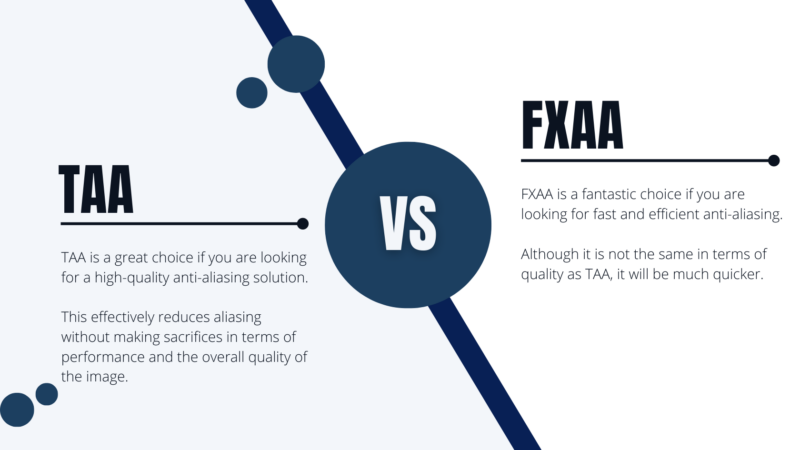 Both of these anti-aliasing methods come with lots of benefits, and what typically makes the difference when opting for either is the PC rig one possesses.

TAA is a great choice if you are looking for a high-quality anti-aliasing solution. This effectively reduces aliasing without making sacrifices in terms of performance and the overall quality of the image.

On the other hand, we have FXAA, which is a fantastic choice if you are looking for fast and efficient anti-aliasing. Although it is not the same in terms of quality as TAA, it will be much quicker.

TAA vs. FXAA: Which One to Pick for My Gaming?

The answer to this question will often depend on the game you want to play. For instance, if you plan to play a fast-paced game with a lot of movement, TAA might be the right option for you to choose.

On the flip side, for games that are slow in pace and do not have many dynamic movements, FXAA might be the right choice. Ultimately, you will have to decide on your own what works better for the particular game you are playing.

If you want to play fast-paced FPS titles like Fortnite, Apex Legends, Counter-Strike Global Offensive, or PUBG, you should definitely opt for FXAA over TAA. It is a better option, considering the minimal load on the GPU, and it will provide faster performance, which FPS gamers constantly chase.

Games such as Red Dead Redemption 2 or Cyberpunk 2077, with huge open worlds and tons of tiny details and visuals, will benefit more from the TAA setup. This is, of course, only the case if you have an excellent GPU that can take a punch from these types of modern games.

The bottom line is that you will have a much better visual experience when using TAA. However, it is an anti-aliasing method that requires a powerful graphic card, and unless you have one, the performance will take a significant hit.

On the other hand, if the speed and quickness in performance are what you are after, and if visual details do not concern you that much, you should always opt for FXAA as it provides a minimal load on the GPU.